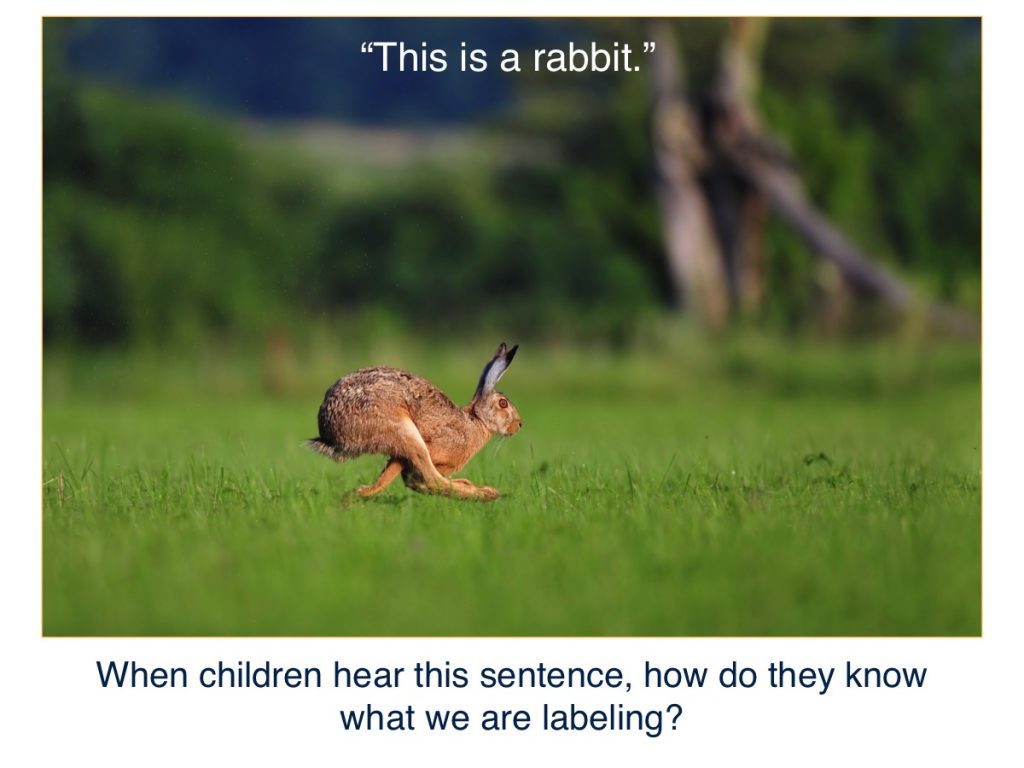 How do children learn what different words mean? At first glance, this process may seem straightforward. A child sees a rabbit running across a field. A caregiver points to the rabbit and says, “This is a rabbit. Look, a rabbit! Did you see the rabbit?” Even in this simple situation, word learning is not easy. How does the child know that the caregiver is labeling the rabbit? She could be labeling the grass under the rabbit’s feet, or the motion of running. Given how many things a word could refer to, how do children figure out what it means?

There are different ways to match a word to the object or action it describes. Some researchers believe that children use constraints, or simple assumptions, to uncover word meanings. For example, if a child hears a word directed at an object, he would assume that the word is the name of the whole object, not just a part of it. Consider the picture of the rabbit. Children will assume that the caregiver is naming the rabbit, and not just the rabbit’s ears. Children begin associating words with whole objects during their second year of life. This bias continues well into the preschool years. Children’s tendency is to associate new words with whole objects, not their parts. As children learn more about the world, they reject this tendency more often to learn names for parts.

When they are first learning words, children will also assume that each object should have one name. For example, imagine Sam looking at two animals. He knows that one of them is called “dog” but he does not yet have a word to describe the other animal. Sam’s mom calls one animal a “rabbit.” Sam will assume that the word “rabbit” is the label for the animal that is not the dog. Bilingual toddlers use this strategy much less often. Why might this be the case? For bilingual children, objects have more than one label. So it is not a useful strategy to assume each object only has one name.