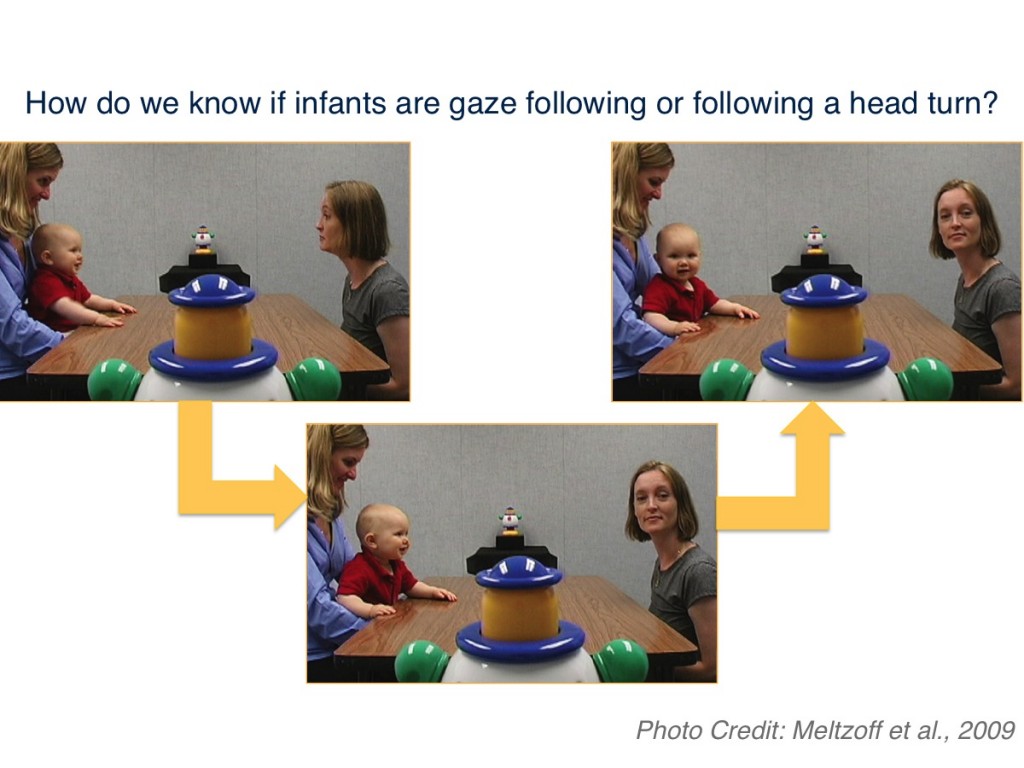 We’ve described some examples of gaze following, but let’s also talk about things that might seem like gaze following but actually are not. What if a loud plane flies overhead? If a child and her dad look up at the same time, this is not gaze following. The child’s look was a response to the noise. Gaze following isn’t just looking in the same direction as another person. Children must follow the direction of the gaze to see what the adult is looking at.

Around 3 to 4 months of age, infants will turn to follow an adult’s head turn. But research shows infants are likely following the interesting motion of the moving head. When do infants understand that eye gaze connects the looker to an object, person, or event in their environment?

Researchers created an eye-gaze game to find out. Toddlers watched an adult turn her head toward one of two identical objects. In the first picture, a researcher and the child sit across from one another. There are identical toys on either side of the table. The researcher first looks at the child. In the second photo, the researcher turns to one of the toys with her eyes open. The third photo shows the child following the adult’s head turn toward the toy.

Children’s eye gaze was measured by whether they looked at the same toy as the researcher. The researchers also included an interesting control condition. They turned to face the same toys using the same head motion but with their eyes closed. A child who follows the adult’s head turn when her eyes are closed is not yet gaze following. If a child understands that an adult with closed eyes cannot see a toy, then the child should not turn even though the adult’s head is turned. The researchers used this condition to distinguish true gaze following from tracking head movements.