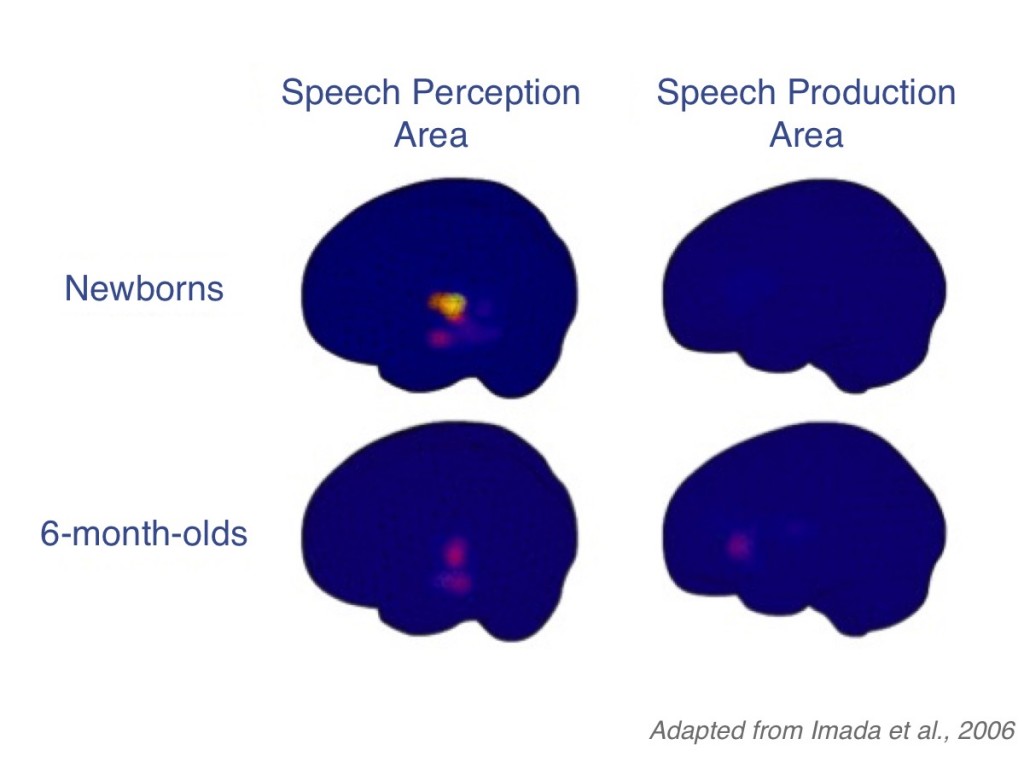 So far, we have talked mostly about infant perception, or understanding of speech sounds during the first year of life. But language acquisition is much more than listening to sounds. Babies typically say their first word somewhere around their first birthday. By the time they are 3 or 4 years old, they speak in full sentences. Production, or speaking, will be discussed in detail in another language module. However, recent research studies show that speech production is tightly linked to speech perception. Infants’ experiences with speech sounds in the first year of life lay the foundation for speaking.

For example, one study found that language production (speaking) areas of the brain change in response to simply hearing speech sounds during the first year of life. The researchers used magnetoencephalography, or MEG. This technique detects the changes in the magnetic field that arise as brain cells communicate by sending electrical signals to each other. Newborns’ and 6-month-old infants’ brain responses were measured as they listened to speech sounds. In newborns, the listening parts of the brain were activated, but the speaking parts of the brain were not. You can see this yellow activation in the brain images. Six month-old babies show a different pattern. Again, you can see activity in the speech perception area, but with these older babies, you can also see activity in the speech production area. Neither the newborns nor the 6-month-olds produced any sounds during the study; they only listened to language. Even though babies were only listening, it is interesting that 6-month-olds’ speech production area is activated. This suggests that by six months of age, the brain is preparing itself for speaking. More specifically, the brain is coordinating the activity between its listening and speaking areas. As children hear more and more language, the listening and the speaking areas of the brain become increasingly coordinated over time.