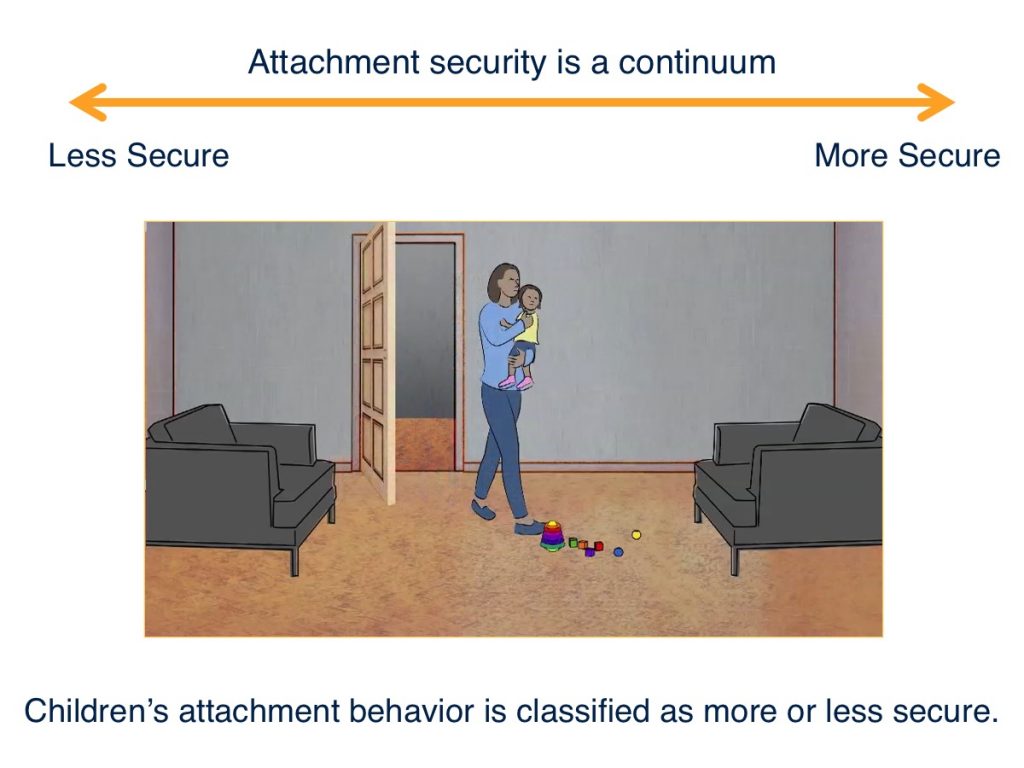 In the video, the girl used her mother as a secure base to explore the unfamiliar playroom. The girl became upset when her mother left the room. But she was easily comforted by her mother when she returned. There are some toddlers who do not respond this way. Researchers observed the reactions of many children during the Strange Situation. Then they classified children’s attachment as more or less secure. Researchers identified three broad attachment behaviors that children use during the Strange Situation. The behaviors are secure, insecure-avoidant, and insecure-resistant. Even though attachment behaviors can be broadly categorized, security of attachment is a continuum. Infants who show less secure attachment may have caregivers who protect and nurture them. Their caregivers just tend to respond at lower rates and levels.

Children adapt their attachment behavior in response to the caregiving they receive. These adaptations help children maximize their survival. For example, insecure attachment behavior can actually help keep a child safe and protected in an unsafe home. Imagine a child living in a home where parents punish or reject the child when she cries. The child might withdraw from her parents so as to not cry and anger them. Children only become endangered when their caregivers rarely nurture and protect them.

On the next page, you’ll see the prevalence of each behavior for children growing up in middle-class families in the United States. There is variation in attachment behaviors both within and across cultures. In other cultures, the behaviors that represent more or less secure attachment can vary. The rates of occurrence of those behaviors can vary as well.

It takes a lot of training to identify attachment behavior in the Strange Situation. If you have concerns about your relationship with your child, it is important that you discuss your concerns with your child’s pediatrician.